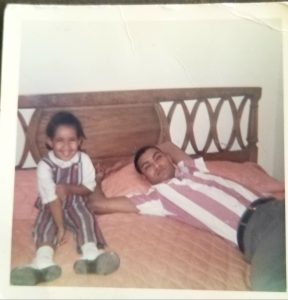 “My father gave me the greatest gift anyone could give a person. He believed in me.” — Jim Valvano

“My father used to say it’s never too late to do anything you wanted to do. And he said, ‘You never know what you can accomplish until you try.'” — Michael Jordan

These two quotes from basketball legends encapsulate some of the lessons my biological father and father figures in my life have taught me over the years. My dad was a child prodigy, star student and basketball legend during his time at Morehouse College in the late 1950s and early 1960s. He went to college at the young age of 15 years on an athletic scholarship to play basketball. I was born in 1962, when he was 20 years old. I feel blessed to have a relatively young father. When I talk to my friends and  read through Father’s Day posts on social media at this time of year, I hear and see many are honoring fathers who are no longer in their lives. In many ways, my father and I grew up together. We were not in the same home for all of my life, but I always knew my father loved me and was no more than a phone call or plane ride away. There are many ways to be a father, and every man has to find his own way. My father was the son of teachers and a math major in college, yet knew he wanted to pursue a slightly different non-academic career path — “a road not taken,” so to speak, by many Blacks at the time.

Daddy left Atlanta in 1970 and moved to the San Francisco Bay Area of California to pursue a career in business, largely because California offered more professional opportunities for people of color than The South did during that period. He became a successful businessman and exposed me and my sister Maria to an alternative lifestyle to the one we experienced in Atlanta, which, with all its greatness, was still a very segregated and relatively conservative town. Although my father did not pursue a professional career as a teacher, in many ways he has been one of my greatest teachers. One of the things he taught me was how to make some good ol’ down home fried chicken. Here are a few other lessons Daddy taught me about how to live in joy and style:

Be Courageous – Pursue your dreams and don’t be afraid to fail.
Be Confident – Don’t ever let anyone tell you that you can’t do something.
Show Integrity – Own your life! Don’t blame others for your failures. Don’t let others take all the credit for your successes.
Be Enthusiastic – Work hard AND play hard!
Be Authentic – Have a sense of humor. Life doesn’t always have to be so serious! Dance! Have fun!
Be Flexible – Admit when you’re wrong, say you’re sorry and most importantly, work to correct your mistakes.
Be Adventurous- If you’ve never failed at anything, you’ve never really pushed yourself or taken any risks. Don’t wallow in your failures for too long, learn from them and keep moving.
Be Resourceful – Seize every moment you can to enjoy life. Tomorrow is not guaranteed.
Be Humble – There is always someone who will be better or worse than you at something, but no one is you. That’s your power!
BE OPTIMISTIC!

Since I didn’t live in the same home as my father most of my life, and he was in fact on the opposite side of the country, there were several other very influential father figures in my life that I want to honor this Father’s Day:

My maternal grandfather, “Grandaddy,” James Ferrell, was one of a family of 16 children and the son of a carpenter/builder from LaGrange, Georgia. His mother was a part-time laundry woman for white families, in between taking care of her 16 children. After he moved to Atlanta, Grandaddy founded Ferrell & Son Construction Company and worked long days as a building contractor/construction worker. Yet whenever I was at his and my grandmother’s house in Atlanta, I remember his being home most nights in time for dinner. He was not formally educated past high school, although he had class and worked to provide the best for his family, eventually acquiring land on the south side of Atlanta, where he built affordable residences for African-Americans. He was fairly serious most of the time, not much of a jokester.  I remember him on occasion getting annoyed with me and my cousins if he saw us giggling or acting in a manner that he felt was too simple or silly. He would say something like “Don’t be a ‘grinning jack’!” Sit up straight and tell me about what you’ve been learning in school.” My cousins and I would laugh later when he wasn’t around, because none of us knew what the word, ‘grinning jack’ meant. I assume it was an old-fashioned term for a “simpleton.”  I don’t remember Grandaddy being much of a sports fan – when he turned on the TV, he frequently watched the news or public television – he liked the classical music concerts on PBS. A Southern Baptist, regular churchgoer, and Deacon of the church, Grandaddy didn’t really condone drinking or card-playing. He and my grandmother had a farm in their backyard, and he also liked going to the farmers market in Forest Park, Georgia to pick up fresh sweet watermelon, sugar cane and other healthy natural treats to share with his family. Grandaddy’s idea of having fun with his grandchildren was spending time enjoying good food. Grandaddy was very traditional about his cooked meals, in that he didn’t really cook – he left that to Grandmama. 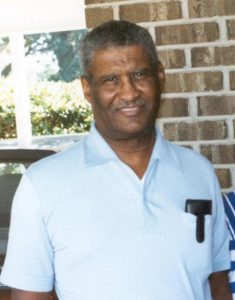 My paternal grandfather, “Pappa,” Clinton Elmore, Sr., was the strong, silent type. He was college educated and served in the military. When he came back from the war, he made a career as a math teacher and high school principal in the Montgomery Public Schools.  Pappa must have been a decent communicator to rise to a leadership role in the school system, though he wasn’t very talkative at home. Pappa was a logician, a competitive bridge player and liked doing crossword puzzles, word hunts and other games that challenged his mind. When Pappa said something, it was usually very profound. He loved his family and enjoyed cooking for us. Our favorite dish was his homemade ice cream that he made from scratch  – custard made in a double boiler, frozen and manually-churned in a wooden ice cream freezer with ice and rock salt. He would usually make a vanilla base and set aside portions to mix in fruit flavors to accommodate different family members’ preferences – some of us liked strawberry, others liked peach and a few liked pineapple. When he wasn’t on the road playing in a bridge tournament, Pappa enjoyed watching TV, sports, movies, all of it. Pappa was also Baptist and an active church member, but he definitely played his share of card games, and didn’t mind the occasional shot of whiskey either! 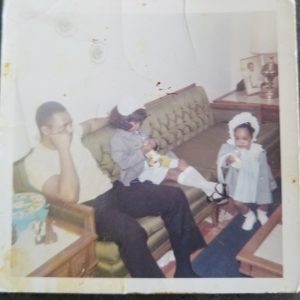 Then there was Uncle Clarence (Clark), my mother’s sister, Aunt Joyce’s husband. Uncle Clarence lived in Atlanta and was the family grill expert. Whenever we had summer barbecues, we could depend on him to get the meat done just right! Of course, we didn’t have gas grills at the time, so he had to make the fire from scratch on a charcoal grill. Eventually he mastered the Kamado smoker, which allowed him to slow cook the meats and get the flavors infused without drying the meat. Once my parents divorced and my father moved to the West Coast, Uncle Clarence took on some of the fatherly duties for me and my sister. He taught me how to ride a bicycle, and (unbeknownst to my mother) I heard him come deliver the toys on Christmas Eve, (after he had set up my cousins’ Christmas toys at their house) while I pretended to be asleep waiting for Santa to arrive. Uncle Clarence, a biology professor at Morehouse College, enjoyed watching nature shows and would frequently sit with the kids to watch National Geographic on TV. A native of Winter Park, Florida, he also enjoyed fishing and took us on a few fishing trips in places like Anna Ruby Falls, Georgia. He was generally very easygoing and good-natured, with a fun sense of humor. 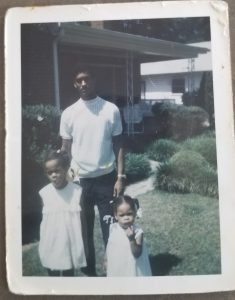 My youngest father figure was my father’s brother, Uncle Steve (Elmore), nicknamed “Uncle Willie.” I never knew how he got this name. Steve is 10 years younger than my father, so he was almost like an older sibling for a while. I remember when visiting my grandparents in Montgomery, Alabama, when Steve was still living at home, how he would enjoy playing with me and doing things like tickling me until I was laughing uncontrollably. When he moved to Atlanta from Montgomery, to attend Morehouse College, I would look forward to the times when he would visit us for a meal or just to check in. He was also a basketball player, drop-dead handsome and very cool! In fact, I remember his being a cigarette smoker at the time and entertaining me by blowing smoke rings in the air from his Kool cigarettes. Steve was a star student at Morehouse College and went on to become a CPA and head controller at one of Atlanta’s premier banks. In many ways, my Uncle Steve has been a role model and professional mentor as a business person. He was also influential to my sister, Maria, who is currently a CPA, in her career choice and professional opportunities.

I’m feeling blessed to have these great Father Figures and role models in my life who have believed in me and taught me to believe in myself, even when I was at my lowest and felt like the world was against me. Thanks to them all. It takes a village to raise a child, and men are a part of that village too. Happy Father’s Day to all the fathers, grandfathers, big brothers, uncles, mentors and friends this Father’s Day. Here are a few ideas on how to show them how much they’re appreciated: